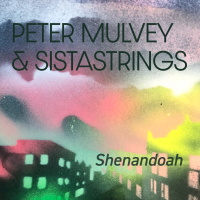 Out now! New single from Peter Mulvey and SistaStrings: “Shenandoah,” from the forthcoming album Love Is The Only Thing out August 12 on Righteous Babe Records.

“Nobody wrote this song, and nobody has ever recorded it. It’s hardly even a song- it’s a region, an ecosystem, a frequency. It’s deeply rooted in the American soul: wild and weird, rustic and deceptively complex, and of course also it is a fever dream of the colonizer, and yet and yet and yet… it’s a sequoia, a thunderstorm… it’s the wide Missouri. We offer our humble tributary, which took our whole lives to learn.” – Mulvey

“Mulvey’s rugged yet calming vocals combine with warm acoustic guitar and the rich strings to create a mood that is intimate and reflective.” – Glide Magazine