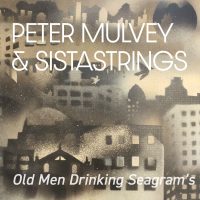 Righteous Babe Records presents “Old Men Drinking Seagram’s,” a new single by Peter Mulvey and SistaStrings from their forthcoming album Love is the Only Thing. Peter Mulvey exposes the bleakness of a generic American town with lyrics such as “nobody keeps a garden, they’ve got big white lawns” and “lord help the smart kid, the one who’s clearly getting gone.” An acoustic portrait of small-town America, “Old Men Drinking Seagram’s” is a song for “this summer, right here right now, for sure.” (Americana Highways).

“John Statz and I parked on the dike in the West of the Netherlands that separates the North Sea from the Zuiderzee. We sketched this portrait of a few American towns we’ve had the dubious pleasure of knowing. Some of the meanest things I’ve ever said get said in this town. Often, our daily life is a search for the optimal balance between honesty and kindness. In art, sometimes the gloves come off. All the noise in the background is Chauntee and Nathan.” – Peter Mulvey