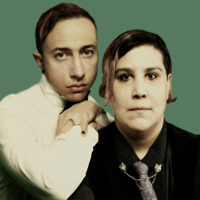 The FMs are a bastion of queer music. Formed in 2017 by Matte Namer (they/them) and Frankie Rex (they/he), who met in high school in New York City, the Brooklyn-bred band exudes subversion with style (and of course, sex), rethinking long-standing societal programming, and the rebellion of simply being one’s authentic self all through their politically charged pop missives. With their name even being a play on the gender binary, that fluidity has always been front and center, showcased as much in the band’s music as their evocative, seductive videos and stage performances. Whether it was through the self-curated immersive live performances that helped start their career (intimate and inclusive underground art performances that took place on a historic boat docked in Brooklyn) or via their 2017 debut album Machinacene Epoch (which took cues from glam, synth-pop, industrial, stoner rock, dance music, and beyond), The FMs have been long standing proponents of using one’s own unique voice to continue important conversations about topics like gun violence, toxic masculinity, selfie culture, and artificial intelligence.

Matte Namer (bass & vocals) and Frankie Rex (guitar & vocals) are two individuals whose respective journeys intertwined. “We realized our voices had this incredible synergy, and both didn’t identify as cis-gender,” Matte recounts. Their friendship, their desire for self-expression, and their mutual influences of A Perfect Circle, New Order, St. Vincent, and Elliott Smith form the foundation of The FMs. Frankie and Matte, like their musical heroes, look to subvert the societal perspective of “normality” to raise the voices of “the other.”

Though they spent years cutting their teeth across Brooklyn (including Namer helping start the new House of Yes in Bushwick — one of the bathrooms is even named after them!), the duo now each resides in Ithaca, NY, attracted to the vibrant, artistic queer community there.

“As our songwriting evolved, I think we allowed ourselves to be characters in our own stories,” Matte explains. The FMs firmly believe the personal is political, doing so with zestful songwriting, irrepressible hooks and fierce intent. It’s the kind of vital combination that’s surprisingly rare and needed in the world now more than ever. 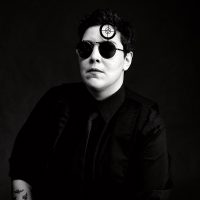 With the most infinite sadness, The FMs have shared the news that Frankie Rex, singer, guitarist, and songwriter for The FMs, passed away from an apparent fentanyl poisoning at their partner’s home in Ithaca. Tributes for Frankie have been paid by friends, fans, and Billboard.

Today Queerties Award-nominated alt-rock rule breakers The FMs drop their new double-sided vinyl single including their recently released ode to polyamory “T/riangle” and their inspired new cover of Ultravox’s ‘77 track “My Sex.” Both songs are accompanied by beautiful videos by Matt Mahurin.

On Zero’s End Records distributed by United For Opportunity 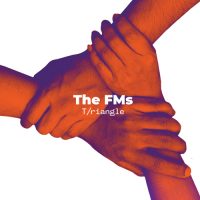 On Zero’s End Records distributed by United For Opportunity