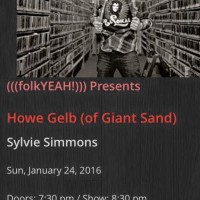 Tomorrow night, Sylvie Simmons reunites with Howe Gelb of Giant Sand at The Chapel in San Francisco. Sylvie will be premiering some new songs in her opening set as well as playing songs from her album Sylvie, which Howe Gelb produced and played on. Howe’s headlining set will focus on piano songs, also including new material from his next album Future Standards.
Tickets