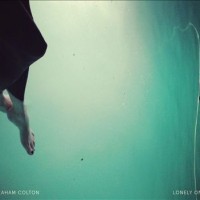 Graham Colton‘s 2014 album, Lonely Ones, finds the Oklahoma-born singer/songwriter broadening his sonic palette to include a substantial mix of keyboards. The story goes that after Colton befriended Oklahoma’s own Wayne Coyne of the Flaming Lips, Coyne lent him some keyboards and encouraged him to start writing new material with them. Having built his career writing sincere, melodic pop in the vein of John Mayer, the move toward a more indie rock-influenced sound is surprising, if not a completely left-field move for Colton. Certainly, Colton‘s 2007 effort, the admirable Here Right Now, featured a mix of keyboards and other sounds that revealed his love of ’80s college rock, as well as the influence of more contemporary bands like the Shins and MGMT. However, Lonely Ones goes much further than anything Colton has done before in showcasing the more indie rock end of his influences. In that sense, with his use of piano and falsetto backing vocals, handclaps, and other production flourishes, Colton often sounds something akin to the Raconteurs‘ Brendan Benson fronting MGMT. Of course, some of the credit for the sound of Lonely Ones should go to Colton‘s producers and songwriting partners, Chad Copelin and Jarod Evans. Working together, Copelin and Evans help frame Colton‘s resonant, yearning vocals with layers of echo chamber-laden instrumentation and neo-psych atmospherics. Ultimately however, it’s Colton‘s catchy yet always personal songs that draw you into this colorful sonic pastiche.