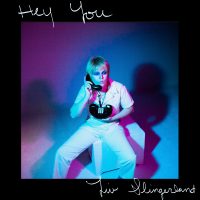 We’re excited to announce that Liv Slingerland’s debut album, Hey You, is out now on Righteous Babe Records!

“The guitarist and bassist has been in demand as a touring musician for some time now, having recently even scored a spot playing SNL with Olivia Rodrigo and currently hitting the road with Halsey. Yet somewhere in the midst of all this excitement Slingerland managed to cobble together 10 recordings which will serve as the debut full-length from the songwriter, with ‘Hey You’ slated for an August 5 release via Ani DiFranco’s queer- and women-focused label.” – FLOOD Magazine

“Liv stands poised as the next great classic rock star…With the attitude of Joan Jett and Cherie Currie mixed the undeniable power of Stevie Nicks, Liv is the embodiment of cool” – Hollywood Life