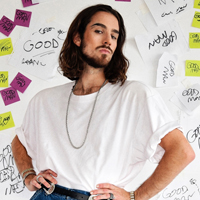 The full-length debut from Miles Francis, Good Man is a work of gorgeous paradox: a nuanced exploration of masculinity and all its trappings, presented in a sound that’s joyfully unfettered. As the New York City-bred singer/songwriter/multi-instrumentalist reveals, the album’s endless complexity emerged from a period of unexpected and life-changing transformation. “Over the last few years I’d written all these songs interrogating manhood and male nature, but it took quarantine to really focus on what the songs were saying altogether,” Francis recalls. “The album became about showing a man going through a complete unraveling of their conditioning, and by the time I’d finished working on it I’d started to identify as non-binary.”

Produced by Francis and recorded in their longtime studio (located in the basement of the Greenwich Village building they grew up in), Good Man arrives as the most visionary and elaborately realized output yet from a polymathic artist known for collaborating with the likes of Angélique Kidjo, Sharon Jones & The Dap-Kings, and Arcade Fire’s Will Butler. In dreaming up the album’s kaleidoscopic sound, Francis embraced an experimental process that involved elegantly merging their most formative influences. “I grew up with boy-band posters from floor to ceiling in my bedroom, and that music very much dominated my life when I was young,” they point out. “Later on I studied Afrobeat music and started playing with different groups in that world, which helped me to get to a place where I could be totally free in my musical expression. With this album I finally got to the point of bringing together these two worlds that made me who I am, even though they may seem unrelated.” Also naming shapeshifters like Prince and David Bowie among their essential touchstones, Francis ultimately alchemized those inspirations into a highly percussive form of art-pop, both lavishly orchestrated and visceral in impact.

Mainly recorded in solitude but featuring several guest musicians on strings, shekeres, background vocals, and horns, Good Man takes its title from a spellbinding piece of avant-pop encompassing many of the album’s central themes (e.g., prototypically male impulses and anxieties, the gulf between one’s true nature and meticulously curated presentation). “That song came from conversations I’d had with men in my life who identify as progressive-minded, but who seemed to have some blind spots around the #MeToo movement,” says Francis. “I heard people bemoaning cancel culture or saying things like ‘You can’t even put your arm around a woman anymore’—which is so ridiculously shortsighted. The genesis of all these songs was that question of what it truly means to be a good man.”

Throughout Good Man, Francis matches their incisive observation with a direct outpouring of feeling and, in many cases, fantastically offbeat humor. On the album’s effervescent lead single “Service,” they deliver a groove-heavy and pitch-perfect send-up of the over-the-top obsequiousness that pervades countless classic boy-band songs (“There’s this very impulsive offering of help and support, in a way that makes you wonder if there’s some other motive that’s not named in the lyrics,” Francis notes). Another track examining what they refer to as “the male anxious impulse,” “Popular” unfolds in frenetic rhythms and radiant background vocals courtesy of Lizzie Loveless and Lou Tides (aka Lizzie and Teeny Lieberson, formerly of TEEN). “Everyone indulges in having an ego and wanting to be recognized, but men seem particularly bent on the power element—whether it’s taking up space in a room or leading a country,” says Francis.

An album rooted in intense self-reflection, Good Man also includes such moments as “Let Me Cry,” a deeply personal number illuminating Francis’s poetic sensibilities as a lyricist (“Indoctrinated against moving his hips/For fear that it could attract another man’s lips”). “As a kid I was really out there and just fully myself, but over time there was this boxing-in that started happening from all different directions,” says Francis. “‘Let Me Cry’ is about asking, ‘Can you break out of this box, and find your way back to that inner child again?'” One of Good Man‘s most confessional tracks, “Rainjacket” channels the quiet anguish and subtle power in accepting your own vulnerability. “It’s about dealing with your life in a real way, instead of just pushing forward and telling yourself everything’s fine,” says Francis. “It’s that moment of admitting, ‘No, you’re not fine—go see a therapist, work some shit out.'” And on “Don’t Fight Anymore,” Good Man closes out with a raw and revelatory expression of surrender. “That song still pulls at me whenever I listen to it,” says Francis. “It’s about breaking down and begging for some sort of answer to all these questions, and then finally releasing the baggage and really looking at yourself for the first time. It’s incredibly sad in a lot of ways, but it’s also hopeful—like an awakening, or the ultimate letting go.”

As an artist indelibly informed by the kinetic energy and eclecticism of New York City, Francis drew immense inspiration from their hometown in the making of Good Man. “The 2020 protest movement renewed my focus on what I stand for as a white, male-passing person, artist, and New Yorker. The most direct way I could be of help was to get a drum and go out to marches to keep a beat for protest leaders,” says Francis, who assisted a friend in the founding of Musicians United, a New York-based collective that supplies musicians for organizers. “In the beginning, the goal was to incorporate anti-racist work into my life, but the experiences I had and the people I met—particularly through the Black Trans Liberation/Stonewall Protests movement, led by Qween Jean and Joel Rivera—ended up giving me a new mirror to see myself in, to help me work to break free of my conditioning and truly find myself under the umbrellas of queerness and nonbinaryness.”

In bringing Good Man to life, Francis worked in close collaboration with filmmaker/photographer Charles Billot to create such striking visuals as the album’s surreal cover art (a wonderfully warped photo that features their mother and father alongside their own doubled image). “The cover is what made me realize what this album’s really about,” says Francis. “It’s the idea of one person embodying all different types of people, and the idea that we don’t exist in a vacuum: we’re created by our families and our trauma and the whole world around us.” Equal parts playful and unsettling, that photo also echoes the palpable sense of abandon that Francis brought to every element of Good Man. “When I’m in my studio, it feels like being completely free of the outside world, free of gender, free of everything except me,” says Francis. “I feel like I’m finally figuring out how to take that freedom beyond my musical expression and bring it into every aspect of my life. That’s what led me to nonbinaryness, and now I want to share that feeling with everybody.” 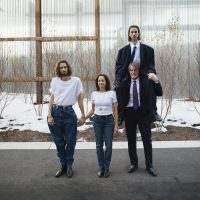 Congratulations to Miles Francis on the release of their new album Good Man out today!