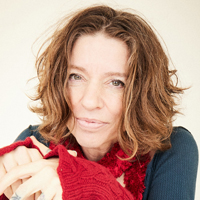 “My last record was very inward-looking,” says Ani DiFranco. “I was pregnant and then raising a screaming infant. But now that kid is about to turn four, so I got out of the weeds of personal space and started looking outward again, being more engaged, more big ‘P’ Political. As an artist, I like to be out in the world, and what initially compelled me was to try to push society to a better place. So when I’m not in heartbreak or motherhood mode, that’s where you’ll naturally find me.”

With her twentieth studio album, Binary, the iconic singer/songwriter/activist/poet/DIY trendsetter returns to territory that brought her to the world’s attention more than twenty-five years ago. One of the first artists to create her own label in 1990, she has been recognized among the feminist pantheon for her entrepreneurship, social activism, and outspoken political lyrics. At a time of global chaos and confusion, DiFranco is kicking ass and taking names, with a set of songs offering a wide range of perspective and musical scope.

She describes a moment during the writing of “Play God,” an unblinking pro-choice battle cry, as a particular breakthrough. (A live version of the song was included in the anti-Trump “30 Days, 30 Songs” campaign alongside tracks from Death Cab for Cutie, Aimee Mann, Franz Ferdinand, and more.)

“When you make a record about family and relationships, people assume you’re mommy now and you’ve lost your edge, and it’s going to be all buttercups from here on. So that line had the feeling of ‘Take that! My kid is sleeping right now and I want to talk about some shit!”

On Binary, DiFranco tackles the challenge and necessity of teaching non- violence with “Pacifist’s Lament” and the need for empathy in “Terrifying Sight.” Remarkably, though, these songs—recorded, in her usual fashion, in a couple of short full-sprint sessions spread across several years—were all written prior to the 2016 elections and attendant political turmoil.

“I’m not surprised,” says DiFranco. “Over twenty-five years, I’ve found that my songwriting is often full of premonition. It shows me, in a deep and spooky way, how we know things on levels below consciousness. I write songs and then they happen, and later I realize what they’re about. I’m just happy to have some good tools in my toolbox to address what’s happening now—the feminist diatribes are turned up nice and high on this record!”

She notes that Binary’s title track is key to her intention on this project. “I always title a record from the song that seems to be at its core,” she says. “An underlying theme in the songs, and in the feminism I want to engage society with, is the idea that autonomy is a fallacy—nothing exists except in relationship to something else. We are, in some senses individuals with individual liberties and unique powers, but that’s only a surface story.”

Though this concept is closely tied up in our present-day obsession with technology (“Sitting alone at home, staring at a screen, you can’t really know anything, because knowing is engaging,” she says), DiFranco also reveals a growing connection to nature and the physical world.

“Every year on Goddess’ Green Earth, I understand my relationship to it more,” she says. “My early songs were all human drama. I don’t think I noticed the bigger picture at all—I was transfixed by power dynamics between people. Now I see that it’s largely the providence of women to really embody nature, so I do think I’m getting back to basics, and it’s a shift for me.”

The backbone of Binary’s sound is DiFranco’s long-time rhythm section of bassist Todd Sickafoose and drummer Terence Higgins, but on much of the album, the trio is augmented with some all-star guests. “I knew I wanted to involve some of my brilliant friends this time out,” she says. “We made some calls and got a party going. That was the idea, to reach out and have some other spirits enter.” When it came time to mix Ani turned things over to Tchad Blake (The Black Keys, Pearl Jam), the result a bold sonic imprint elevating the songs to a new level in her canon.

Virtuoso violinist Jenny Scheinman and keyboard wizard Ivan Neville both join in for more than half of the record; “they are so captivating and they elevate my shit whenever they come near it,” says DiFranco. Other contributors include the legendary Maceo Parker, Bon Iver’s Justin Vernon, and Gail Ann Dorsey, longtime bassist for David Bowie. New Orleans resident DiFranco takes special pride in the Crescent City funk spearheaded by natives Higgins and Neville on a number of the tunes. “Their souls are of this place,” she says. “The feel they bring is something they got in utero.”

For the better part of 2016, DiFranco beat the drum for voter turnout on her “Vote Dammit!” tour, focusing on registering and inspiring people to vote. In the days following the election, fans turned to her for guidance with renewed earnestness, anxious to hear music and wisdom from the longtime activist. Ani encouraged fans to take political action and did the same herself, participating in the Women’s March on Washington and performing at the official Women’s March after party benefitting Planned Parenthood with The National and Sleater-Kinney.

Binary, of course, is being released into a world in which music distribution and consumption have transformed rapidly and dramatically. For DiFranco, a true pioneer in the music industry with her Righteous Babe label, it’s a time to reconsider the possibilities and ambitions of her business.

“While I was precedent-setting at one time with Righteous Babe and my indie crusade, I feel like, in the time it took me to nurse another baby into being, I’ve fallen behind,” she says. “The universe and technology have continued to evolve, and the idea of harnessing technology and crowd- sourcing everything—money, knowledge, revolution—is a very powerful concept that I’m ready to get more involved with. Righteous Babe is starting to grow now into something that will hopefully become avant-garde once again- more of a collective, more dynamic.”

“I’m trying to figure it out daily,” says Ani DiFranco. “Just like always.” 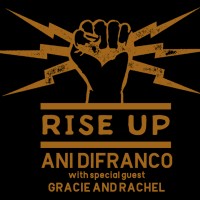 Ani DiFranco’s show May 10 at Music Hall of Williamsburg is sold out! 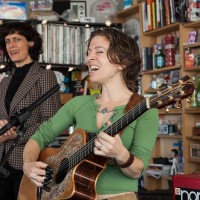 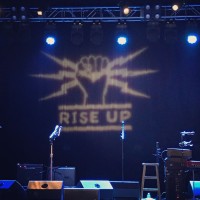 We all had a blast at Ani DiFranco’s Babefest! See highlights here. 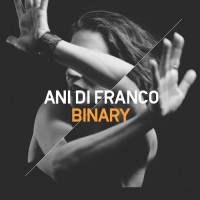